We checked out of our motel in Frederick, Maryland at 7 AM and drove south to Charlottesville, Virginia. We had an 11 AM reservation for a tour of Thomas Jefferson’s home, Monticello, at Charlottesville. Monticello is a UNESCO World Heritage Site.

We had to check in at the visitor center at Monticello 30 minutes prior to our 11 AM tour time, so we had no time to waste on our drive to Charlottesville. We’d be driving along U.S. highways and state routes, not Interstate freeways, so we couldn’t afford to make any long or unscheduled stops along the way. The morning drive to Monticello gave us an opportunity to see rural Northern Virginia.

We arrived at the visitor center at Monticello at 10:10 AM, giving us plenty of time to watch the 15 minute introductory film about Jefferson’s life.

At 10:40 AM, after the introductory film ended, we boarded a shuttle bus at the visitor center. On the bus, we were accompanied by other tourists that had tickets for an 11 AM tour. The bus drives about a mile up a hill to Monticello. Arriving there, we gathered with our tour guide before entering the building. The rules for Monticello were similar to those at Mount Vernon: No photography is allowed inside the mansion, and you are not permitted to touch anything.

Our tour inside the house lasted less than an hour. The building is impressive and our tour guide was extremely well-informed about the history of Jefferson and Monticello. After our guided tour was over, we were free to walk around the grounds outside of the mansion to take some photos.

I must say that the reason we were given for the “no photography inside Monticello” rule was pretty weak. The tour guide said that the mansion is currently furnished with several Jefferson family heirlooms that are on loan (belonging to other individuals and agencies). Due to copyright issues, photography of those “on loan” items is prohibited. OK, I understand that. But, as a visitor, I’d rather the mansion forego those “on loan” items for which photography is an issue – if that is really the only reason why photography isn’t permitted. Give me an 80% furnished Monticello in which I can take photos, rather than a 100% furnished Monticello in which I cannot take photos.

At 1 PM, right on schedule, we were back at the visitor center and ready to ride out of town. We headed to Lynchburg, Virginia, where we’d check into a Best Western motel in mid-afternoon and see a ballgame in the evening. After checking in to the motel we’d have a few hours available to visit Appomattox Court House, which is only 20 miles outside of Lynchburg. 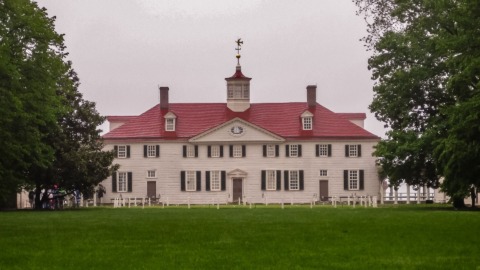